We are pleased to announce the launch of the shot firing in Mining Operations training course at our MRS Training and Rescue centre at Mansfield – the only course available in the UK and Northern Ireland for anyone needing to become qualified in shot firing in mining.

To bring our shot firing training to life, we’re excited to announce that our new Mansfield training simulator caters for people taking part in shot firing courses. It’s important to note that even if you’re qualified in shot firing; if you haven’t shot fired in three years, you’ll need to re-qualify. This new simulator enables trainees to simulate the shotfiring process in a mine including charging of shot holes to specification, undertaking pre and post firing checks and scenarios for dealing with misfires. The HSE inspectors were impressed during their visit on the 28th August 2018 and were very positive in their feedback on our shot firing course.

What does the shot firing course entail?

The shot firing training we provide at our Mansfield training centre is designed for course partakers to demonstrate competence to organise and oversee all work concerning the use of explosives in a mine.

Candidates can expect to learn about the day-to-day use of explosives, and the operations of workers involved in shot firing, explosives storage, transportation and blast design. As safety and security are paramount to these operations, we regularly reiterate that the procedures need to be followed consistently to ensure maximum safety is maintained for all within the mine, and in areas surrounding the mine. 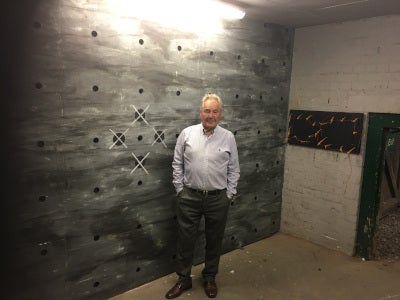 Malcolm is a veteran of the mining and tunnelling Industry in the UK and overseas and a Fellow of the Institute Of Explosives Engineers.

To successfully complete the specialised training course, applicants must demonstrate that they know how to identify and prform duties in the following areas;

Shot firing assessments – here’s what you need to know

Candidates will need to demonstrate the skills, knowledge and understanding to capably perform shot firing operations in a mine. The candidate will successfully complete the training part of the course at Mansfield and then return to mine and undertake shotfiring operations under the supervision of an appointed shotfirer. When the candidate/mine operator feels they are sufficiently competent, arrangements can be made for MRS Training and Rescue assessor to visit site and undertake assessments on the candidate undertaking shotfiring operations. In order to achieve the full Shot firing qualification, participants must meet the requirements of the following National Occupational Standards:

Below are our pre-planned shotfiring courses running during 2020:

Get in contact with our Mansfield branch to book your shot firing training and / or assessment on 01623 623263. Alternatively, you can reach a member of the Mansfield team at eastmids@mrsl.co.uk. Take a look at our MRS Training and Rescue mining qualifications page for more information on shot firing courses, including other areas of training.