October 13th 2020 marks the 10th anniversary of the successful rescue of 33 miners from the San Jose copper mine in Chile, where they had been trapped for 69 days.  The longest underground entrapment in history.

In this article we remember how the 33 miners were rescued and include an interview from BBC Radio Scotland – where MRS Training & Rescue’s Andrew Watson was interviewed about his thoughts from 10 years ago, and today. 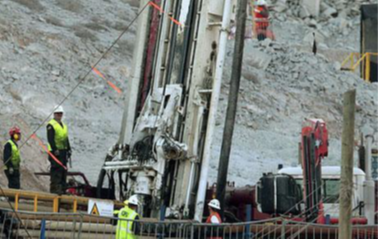 One of the greatest mines rescues ever achieved, the plight of the trapped miners captured the interest of the whole world, and news was broadcast worldwide every day, following the rescue efforts of all those involved in trying to secure their freedom.

Andrew Watson from MRS Training & Rescue, was interviewed by BBC Radio Scotland at the time and recalls he felt the chance of rescue was low. But a decade on, Andrew again gave an interview on BBC Radio Scotland's breakfast programme today, to recall his memories of that time and the heroic work of the rescue team in bringing all the men out alive.

From the initial very bleak outlook and the extreme difficulties faced by the rescuers in trying to get the rescue right,  the world watched as one by one, all 33 miners came out of the mine alive, courtesy of a capsule device used to rescue them.

Although not a traditional mines rescue incident as we would recognise it, this was more about mining engineering. San Jose was a hard rock mine and there were none of the usual gases present that you would find in a coal mine - and plenty of oxygen.  Nature played no part in the accident that trapped the miners.

Back on 5 August 2010, the main ramp into the San Jose mine collapsed, leaving 33 miners trapped 2,300 feet underground. Emergency officials were unable to communicate with the trapped miners and it was 17 days before anyone knew if they were in fact still alive and safe.

Exploratory bore holes, approximately 16cm in diameter, were drilled into the mine and fortunately, a message tied to the end of a drill bit put down one of the bore holes, luckily landed where the miners were and a message came back confirming all 33 were still alive. Located in the mine’s emergency shelter, the miners had been forced to move into the tunnel due to the hot and humid conditions of the shelter.

Once they had been located and had a borehole established, they could then be supplied with air, water and food. So, notwithstanding the physiological and mental effect on the men, there was time to rescue them. The stratum was solid, the borehole needed minimum lining, there was no water problems, nor did they have any no old workings to bore through. Many things which often are faced when trying to perform rescues from a coal mine. However, a rescue like this had never been done before. Whilst miners had been rescued from bore holes before, they never had at such depths.

The rescuers had to work hard and fast and a fantastic amount of planning and effort went into the operation. The rescue plan involved drilling 3 bore holes - called Plan A, Plan B and Plan C – to try and open a passageway to safety for the men.

The drilling took many days but once the bore holes had been drilled and the rescue team had everything in place, they then tested the rescue capsule which would be used to bring the miners out one by one. It was an extremely risky operation – if the capsule had stopped halfway down or had not been able to get pulled back up, or had damaged the bore hole, the miners would be trapped underground.

But the rescue ended better than anyone dared of hoped and all 33 men were pulled out to safety, with shift foreman Luis Alberto Urzua Iribarren, the final miner to be rescued. The dedication, work rate, willingness and planning of the Chilean rescue workers was fantastic – a reflection on the team themselves and the mining sector as a whole.