When we think back to the history of mining, our minds often conjure images of hardworking men covered in coal, underground. What we often don’t think about is the women who also worked in mining – and the crucial roles they played. In this article, we look back at the history of women in mining – and what it’s like to work in the mining industries today. 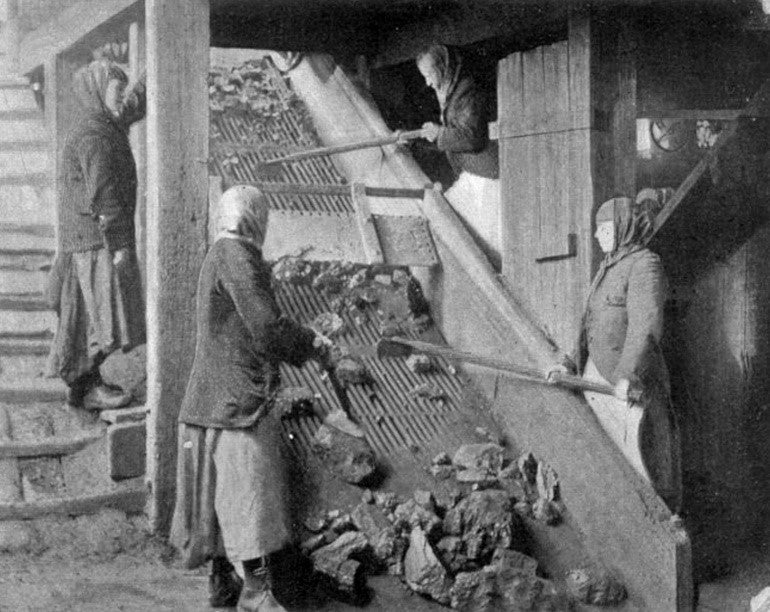 In 1841, 2,350 women were employed in UK coal mines – in a variety of roles. Although women are often thought to have only worked at the surface of mines, women did in fact often hold roles that required them to work underground, before this became illegal in 1842. In 1842, the Coal Mines Act banned females of any age from working underground and required boys who worked underground, to be no younger than ten years old. This law was in response to an inquiry, which was ordered by Queen Victoria.

Queen Victoria ordered the inquiry after an accident at the Huskar Colliery in Barnsley, in 1838. After violent thunderstorms, a stream overflowed into the mines ventilation system and caused the death of 26 children – some as young as 8 years old.

Lord Ashley headed the inquiry in 1840 and revealed that girls and women that worked in mines with boys and men, wore trousers and worked bare-breasted. This shook the prudish Victorian society and resulted in women being banned from working underground, not because of safety but because ‘it made girls unsuitable for marriage and unfit to be mothers’.

After the Coal Mines Act 1842 banned women from working underground, women worked on the surface of mines – completing what was often referred to as ‘pit brow work’.

The women who held these roles were often called ‘Screens Lasses’. They would be required to push half-ton tubs of coals as they arrived on the surface so they could be weighed for transport. In addition to this, the women would work in the ‘screens’ – cleaning, sorting and removing dirt from the coal. This work was hard – and required both strength and stamina!

Pit brow women traditionally wore trousers – but this uniform was later replaced by skirts, overalls, woollen stockings and clogs. The women would wear shawls which were tied at the back and pinned to their fronts – to protect their hair from the dust.

Females who worked in surface roles were often paid less than men, as they were viewed as cheaper labour by mine owners. The miner’s unions were strongly opposed to this and excluded women from becoming members.

By the mid-1950s, improvements in technology and mechanisation led to the decline of Pit Brow Women and Screen Lasses roles, and modern coal processing methods soon made their jobs redundant. However, other roles for women within the coal industry grew, albeit confined to working on the pit top.

Here at MRS Training & Rescue, we are proud to create an environment where all employees are treated with respect and dignity and which is free from harassment. Employment opportunities are open and accessible to all on the basis of their individual qualities and personal merit. We are committed to equal pay in employment for like work, and where possible, provide access to flexible working arrangements for all, that allow our employees to balance personal, family and work commitments.

Our history is in mines rescue, and although the majority of our rescue cover now takes place in other locations – we apply the experiences and lessons learned from many mines rescues to the work we do today.

Today, we provide a wide range of rescue services to a variety of industries. The rescue cover we provide is required by law in most circumstances. By being on site – our clients ensure that they have the provisions they need to provide assistance and rescue to their teams when completing high-risk work.

As well as onsite rescue services, we also provide consultancy. Our teams have provided consultancy in the UK and internationally.

One of the areas that truly differentiates us is the quality of our trainers and rescue operators.  They have real-life skills and expertise in working in hazardous environments. After becoming an employee they undertake a lengthy induction and training programme which is then constantly reviewed and enhanced through their careers.  People are our biggest investment and our greatest asset.

Our trainers and operators are all directly employed as we firmly believe in employing the right people for the role.

Our training system, profiles key competencies by role and by person, and tracks individuals against a required skillset.  This training matrix ensures that required works are planned and key skills never fall out of date.

If you are considering a role at MRS Training & Rescue, visit our careers pages. Here we detail what it’s like to work at MRS, and what we look for. We have also recently filmed videos with team members – where they detail their previous experience and what they enjoy most about working in their roles.