Natural Power is an independent consultant and service provider for those that work on green energy projects. It offers a range of services including geotechnical site investigation work for renewable energy projects and associated infrastructure. As part of this work, the team undertakes to excavate trial pits and form boreholes to take representative samples of the strata to inform civil and structural engineering design, prior to construction.

The team uses trial pitting techniques to ensure they get the correct soil samples to be tested and this involves machine excavated pits across all infrastructure. Once the soil samples have been taken the pits are photographed and backfilled. 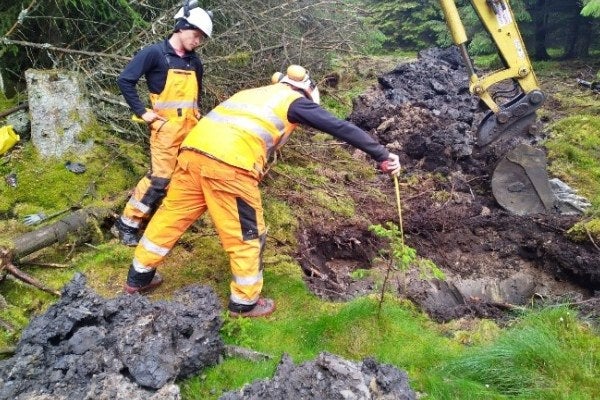 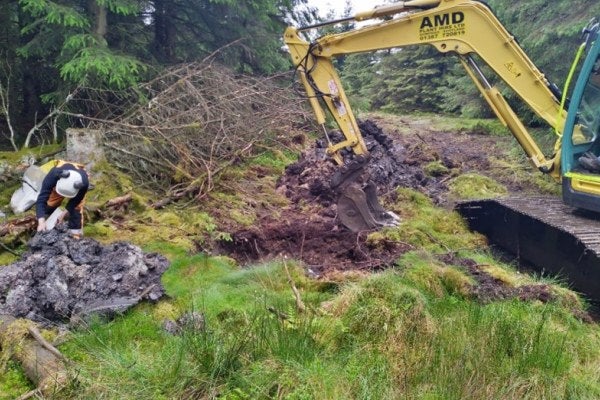 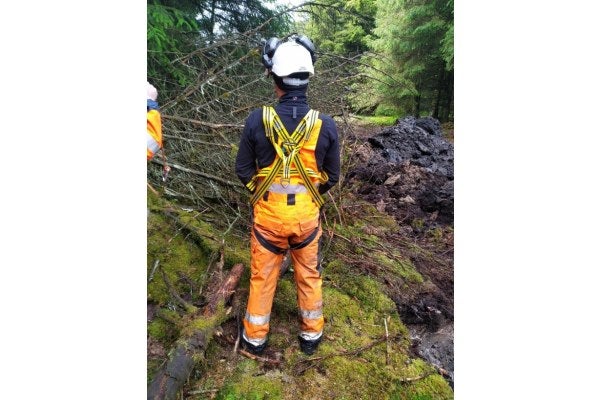 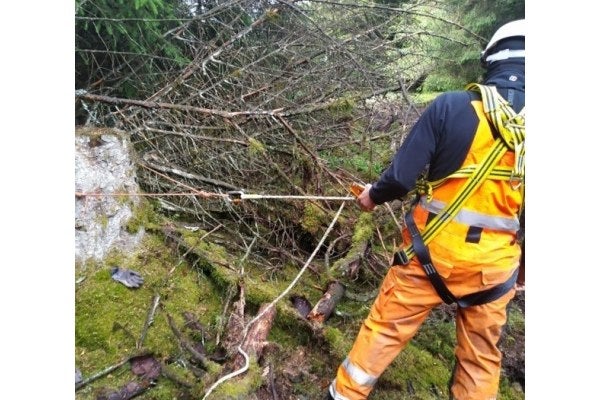 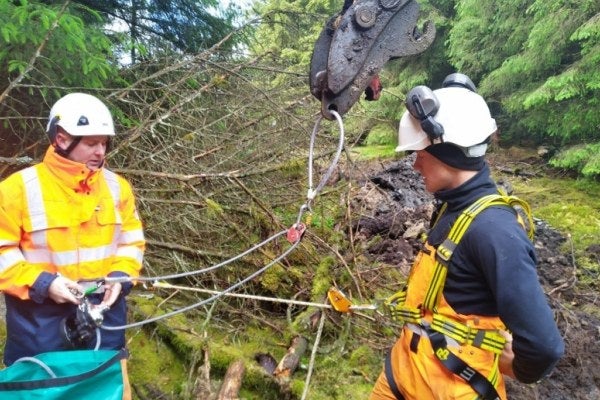 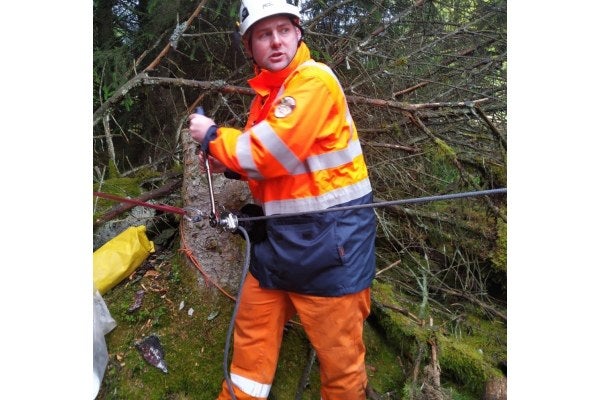 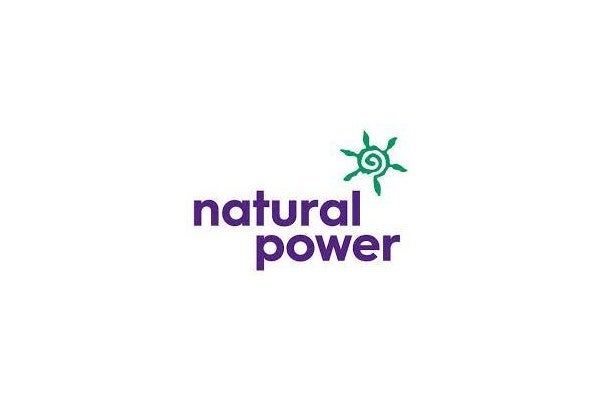 Trial pitting is a commonly used method for geotechnical surveys. Each site is different, however, it is common for soft ground to be found on development sites as well as other geological factors decreasing excavation stability. The UK ground investigation industry has not collectively agreed on the application of the Work at Height Regulations 2005 to trial pitting and individual practitioners currently have a number of ways to approach the issue. Natural Power has taken the view that, where reasonably practicable, trial pitting activities require a safe system to prevent falling into trial pits and casualty recovery in the event of a ground collapse. MRS Training & Rescue attended an ongoing site investigation to trial various methods or work restraint and emergency response.  The wind farm site investigation was being conducted in commercial forestry with peaty soils and abundant debris from felling operations. The ground was soft and quite mulchy and thus presented various risks for the workers.

Natural Power’s Health & Safety Manager, Sean Dryburgh, had worked with MRS Training & Rescue before at a previous employer, so got in touch again to ask for help and advice on control measures that could be implemented to keep workers safe. Sean had identified that when measurements were being taken to identify the strata position, the engineer had to position themselves within the proximity of the open excavation.  It is not common practice for engineers to be anchored, unless in the proximity of known collapse risks, such as mine shafts. This placed the engineer in a position where they could potentially be injured from falling into the excavation by slip, trip or fall from height or from the excavation collapsing.  Common industry practice relies on the skill of the geotechnical engineer to interpret the ground stability and assess whether it is safe to approach the excavation.  A practice that has changed little since the pioneers of engineering geology but one that doesn’t sit well with today’s safety culture.

The Assistant Manager at our centre in Crossgates, Fife, Liam Parrish, visited the site for a full day and brought with him a range of equipment. At the time of the visit, Natural Power were carrying out trial pitting with a low ground pressure excavator. Having witnessed first-hand the works planned and the depth of the pits, Liam initially explained what equipment would make the work safer and what training for the workers was recommended. He was able to demonstrate the equipment and use to the Head of Geotechnical Services during the visit and afterwards wrote a report for Sean, to include in his fuller report to the Senior Management.

Liam explained that the pits they were digging fell under both the Confined Space and Work at Height Regulations and presented recommendations to achieve a safe recovery of a person from inside a trial pit should an emergency arise. In his report, Liam explained the HSE’s definition of a confined space and what specified risk was present in the pits. The soil is considered a free flowing solid which, in the context of a casualty within the pit, could submerge a person and preventing breathing. As there is no way for the material to flow away from a casualty they are classed as a confined space. Furthermore, due to the depth of the pits, the work at height regulations also applied. Liam suggested control measures that needed to be in place to prevent workers from falling into one of the pits. This included personal work restraint equipment but as there were also no anchor points, Liam suggested several improvised anchor points around each pit that could be used – such as trees. The work also required planning for emergencies and rescue.

Following a meeting at Natural Power, the recommendations in the report were implemented. The Natural Power team underwent a one-day training course with MRS Training & Rescue and this course was created specifically for Trail Pitting needs and covered all eventualities to achieve safe rescue of a person within one of the excavations / pits.

Health and Safety is at the core of Natural Power’s business and influences everything it does. By identifying risks early in this project’s life, it made sure that its workforce remained safe, and works were conducted and operated safely.

The recommendations suggested by MRS Training & Rescue are now implemented whenever appropriate during trial pitting.  The site engineers and plant operators are fully trained on how to use the safety equipment and how to perform a rescue should an emergency arise.  The methodology adapted to trial pitting now forms part of their Emergency Response Plan.

Sean Dryburgh, Natural Power’s Health & Safety Manager said “MRS Training & Rescue’s expertise was critical to us achieving a safe outcome. By coming to site, seeing the problem and giving guidance and direction, we now have full training and a solid plan in place for carrying our all future trial pitting works. And once the training needs renewing, we will be back!”

We use MRS for a lot of our operatives and staff training, always found them to be of high quality. Training staff have a vast knowledge of all aspects of what they do, and pass on the information in a relaxing way, which helps settle nerves. Would highly recommend.